Name one thing that greatly helped your lucid dreaming practice

I’m getting that it is truly a skill that can be developed.

That’s great to hear @Sudama ! You’ll find that if you stick with it you’ll be able to journal fewer times and sleep more after a while.

I am finding a balance of late between getting up repeatedly during the night and sleeping through to see which dreams stick in the morning. After a year and a half or so of multiple risings in the night I have definitely settled into a comfortable balance.

These nights I tend to get up only once for some deep Tsalung Tigle meditation after journaling. That meditation really fuels lucidity in the later dream cycles.

Hi,
I found exercising my attention/awareness in this state, is helping to building attention strength, Im trying to train myself to drop to that level as fast as I can, and then hold that state for as long as I can, I also found that you can start manipulating or interacting with the images at this stage too. I have been noting the characteristics and qualities of this state, they are:
-Depersonalisation: individual thoughts become outside entities.
-Spontaneous: images, sounds, scenarios just pop up without any seemingly pre thought or will power or control
-Blinking in and out , from dream consciousness, to waking consciousness
-Dual consciousness: being aware of outer stimuli as well as inner interpretations of that stimuli ( like hearing a car outside in the streets and in my dream seeing a car taking off and the sound correlating perfectly with the imagery in the dream state.

These nights I tend to get up only once for some deep Tsalung Tigle meditation after journaling. That meditation really fuels lucidity in the later dream cycles.

Hey Steve, when you do the Tsalung Tigle meditation, do you mean Tsalung with bodily movement or resting without motion in the stillness of body, silence of speech and spaciousness of mind?

are:
-Depersonalisation: individual thoughts become outside entities.
-Spontaneous: images, sounds, scenarios just pop up without any seemingly pre thought or will power or control

Great observations!
I was thinking of this „paradoxon“: Why, if one is becoming depersonalized in this state, is one experiencing the individual thoughts as outside entities?! I.e. one who is no person still perceives dualistically which implies a subject/object scenario.

Here is my stab at it:
Thesis: In the waking state, individual thoughts are actually not self-made by the individual her-/himself. They are movements of the substrate mind, which are being dualistically interpreted by one’s cultivated habit-patterns.
E.g. the substrate mind is constantly in motion, most of the time unnoticed, producing images and mental phenomena. When such a mental perturbation reaches a certain threshold it get‘s noticed and our habits of like/dislike judgement automatically trigger an emotion, which we interpret as „our“ emotion, although it is actually just a habitual contraction of our mind/energy/body system in response to stimuli. Judgement of a stimulus is ego. Like & dislike have only meaning for the agent who judges the stimulus, they are not inherent in the stimulus itself.
What is happening in the liminal state or lucid dream then? Probably the same thing, but, one‘s mind is calmer than in the waking state, more relaxed, and thus perceives even the more subtler movements of the substrate consciousness, i.e. mostly dreamlike images, thoughts and sounds. When perceiving the dream images, one is still automatically following one‘s habitual pattern of interpreting the stimulus and therefore feels an emotion when for example „being threatened by a dream figure“, experiencing one‘s ego.
When perceiving neutral images, the ego-reaction is less strong or seemingly not present, allowing the observation of the stimulus. Nevertheless, there is probably a very subtle, unnoticed ego interpretation going on, even on neutral images, at least to judge if they might pose a threat or not.
In both states, the images are appearing spontaneously by themselves, but, in the lucid dream / liminal state our minds are much calmer so there we have a chance to observe the movements of the mind without fusioning instantaneously with them. Nevertheless, we still have a ego in the dream, since we still have the habit of emotionally interpreting the images, which is a form of mental contraction.
The skill of calmly observing mental phenomena without contracting is essentially Vipashyana.
I wonder if observed with such an approach, mental phenomena would lose their dualism…

Hey Steve, when you do the Tsalung Tigle meditation, do you mean Tsalung with bodily movement or resting without motion in the stillness of body, silence of speech and spaciousness of mind?

What I am calling Tsalung Tigle is really Inner Heat Yoga (Tummo). I always start with a five movement Trulkhor that I picked up from Tenzin Wangyal and then go into the Tummo meditation from Je Tsongkhapa’s “The Three Inspirations” as translated by Glenn Mullin. Glenn refers to Tummo as Tsalung Tigle.

The Trulkhor part is done sitting with lots of specific movement that is aimed at opening, or really unbinding, the chakras. The Inner Heat Yoga is done in bodily stillness but there is a great deal of movement within the central channel as the drops in the chakras start melting. When I get it right I end up with a single red tinged white bindu drop at my heart chakra in an empty shell of a body.

Wow thats a great deep stab… Makes total sense and is very insightful, thanks for sharing. Its kind of a schizophrenic mind state, when I asked someone what schizophrenia is they said is like a waking dream state.

This is my main day practice now: being lucid. Per TYoDaS, I strive to remain in lucid presence throughout the day. With a subtext of reflecting on my state (am I waking/dreaming?).
I’ve noticed some improvements: If I’m quiet I can remain lucid for fairly long stretches of time. I have at least sporadic moments of lucidity while listening to somebody in a conversation (while speaking is still a bit beyond me for the most part). I will recognize emotional and grasping/aversion reactions very soon after they occur (but not usually immediately as they occur, in the “heat of the moment”). So still lots of room for improvement!

This is interesting. I’ve always thought that the most effective meditation for (lucid, but not necessarily) dreaming is walking meditation: where one remains lucid, present and aware of one’s environment and self while moving through nature, a city, etc. I tried a sitting practice about a year ago and made some progress (following “The Mind Illuminated”), but began having problems falling asleep at night, so let that go. Many people report progress in dreaming with a seated practice, I think it’s time to return to it…

how helpful is the v position for maintaining lucidity?

this is one of my favorite videos of yours, really well done: 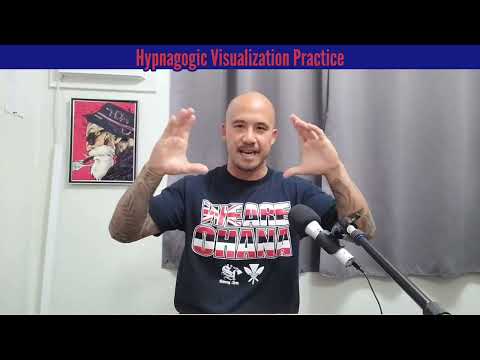 Great to have someone so advanced on this site.