☠ The Dissolution Process at Death and the Bardos by Patrul Rinpoche

“Cliff Notes” from the Tibetan Book of the Dead, from a post to a Facebook Group that I think worth sharing:

This is an extremely pithy explanation of the dissolution process at death (and within Generation stage practice), and the bardos by Patrul Rinpoche. Hope it is useful to you. Paul Wootan. 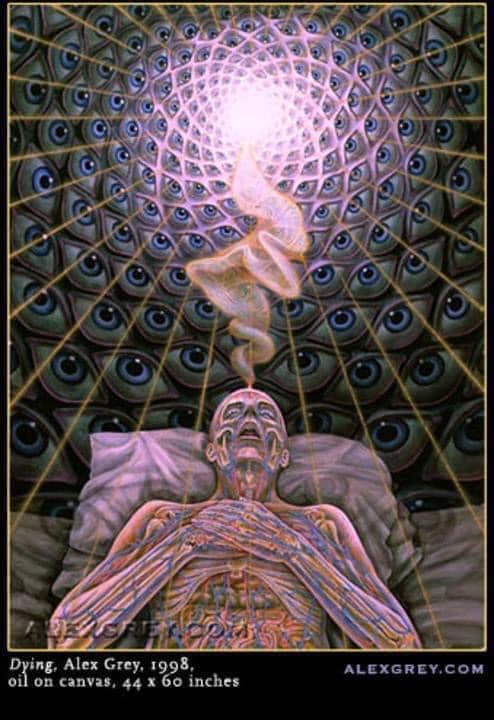 A BRIEF INTRODUCTION TO THE BARDOS

Generally, whenever physically embodied beings die, they first experience the twenty phases of coarse dissolution, which are as follows:

As the aggregate of form dissolves, the limbs twitch, and the body loses its strength and power.

As the mirror-like wisdom dissolves, the mind grows unclear and hazy.

As the earth element dissolves, the body grows dry.

As the eye faculty dissolves, sight becomes unclear and the eye takes on a rounder shape.

As the object form dissolves, the body loses its vitality and weakens.

As the aggregate of sensations dissolves, the dying person can no longer detect feelings.

As the wisdom of equality dissolves, there is no longer any awareness of the three types of sensation (i.e., pleasant, painful or neutral).

As the water element dissolves, the lips, sweat, urine, semen and ovum all dry up.

As the ear faculty dissolves, external and internal sounds can no longer be heard.

As the object sound dissolves, the sounds of the body itself can no longer be heard.

As the aggregate of perception dissolves, it is no longer possible to distinguish between different creatures.

As the wisdom of discernment dissolves, the dying person forgets the names of his or her own parents, siblings or children.

As the fire element dissolves, proper digestion of food is no longer possible.

As the object smell dissolves, the person can no longer detect the odours of their own body.

As the aggregate of formations dissolves, the person is unable to carry out physical activities.

As the all-accomplishing wisdom dissolves, the person can no longer remember ordinary mundane tasks or their purpose.

As the wind element dissolves, the ten internal winds shift from their usual locations.

As the tongue faculty dissolves, the tongue feels thicker and shorter than usual and turns blue at its base.

As the object taste dissolves, the person can no longer detect the six kinds of taste.

Following the twenty coarse forms of dissolution, which unfold in this way, comes the process of subtle inner dissolution:

As earth dissolves into water, the person is unable to move the body and can no longer maintain its strength.[3] It feels as if the body is sinking into the ground. As an inner sign, there is a shimmering expanse of blue, and the impression of softly drizzling rain and flowing water.

As water dissolves into fire, the mouth and nostrils dry up, and the tongue becomes lodged against the palate. As an inner sign, there is an appearance of a smoky haze swirling on a plain.

As fire dissolves into wind, the body loses heat in its extremities, and the stomach’s digestive energy grows weaker. As an inner sign, shimmering red sparks crackle and flicker like fireflies.

As wind dissolves into consciousness, exhalations become longer, and, as the coarse outer breathing ceases, the person is unable to inhale. As an inner sign, there is a vision of a burning lamp, and many torches arranged in a row.

As consciousness dissolves into space, as an inner sign, awareness is very clear, and as an outer sign, there is an experience like the sky devoid of clouds.[4]

Then, as space dissolves into luminosity, four visions gradually unfold:

The white essence obtained from the father descends from the crown, and when it reaches the heart there is what is called ‘appearance’. As an outer sign, this is accompanied by an experience of whiteness, as when moonlight fills a completely clear sky that is entirely free from clouds. As an inner sign, there is a clear experience of the self-clarity of consciousness devoid of any coarse thought states focused on perceived objects.

As the subtle red element of the mother ascends from the base of the central channel, the wisdom of appearance fades into ‘increase’. As an outer sign, a red vision unfolds like a cloudless sky pervaded by sunlight. As an inner sign, there is an extremely clear state of mind devoid of any coarse thought states focused on the perceiving subject.

As the subtle white and red essences meet at the heart, the wisdom of increase dissolves into ‘attainment’. Through this, as an outer sign, there is an experience of blackness, like the thick darkness which falls when the sky turns completely black. As an inner sign, extremely subtle thoughts involving perceived objects and perceiving subject become completely absent, and all distinct concepts based on the appearance aspect of mind fade away, so that, as the ordinary dualistic mind ceases, the wisdom of attainment dawns.

When the the subtle essences of blood and breath, the bindus A and HANG[5] and so on, which are inside the white, silken thread-like channel in the heart, all dissolve completely, the ground luminosity of the moment of death arises. As an outer sign, there is an experience of emptiness and clarity without centre or periphery, like a cloudless sky when it is completely clear. As an inner sign, you remain in co-emergent, non-conceptual wisdom that is entirely without elaboration. If, having recognized this, you can settle into an ongoing experience of the present moment, mother and child luminosities will meet together, and you will be liberated in the first bardo.

In this context, empty luminosity is explained according to the general approach of the tantras, whereas how the forms of the deities arise out of clear light, how the tikles of light and so on appear are explained in the Dzogchen tantras. Nevertheless, it would seem to be rare for these to unfold in a way that provides an opportunity for liberation.[6]

Next, out of the luminosity into which the three visions dissolved, appearances unfold gradually once again, and the body of the bardo of becoming is formed. For the first half of this bardo, however long that might be, you have the form of your preceding life, and for the second half you take on the appearance of your eventual rebirth. All sensory faculties are intact, and you can travel anywhere but the mother’s womb, miraculously and without obstruction. You are invisible to all except those of the same class (i.e. other bardo beings) and those who have obtained divine vision. Since you have taken on something like a body in a dream, for example, which is generated in an instant, and knows neither light nor complete darkness, this is known as the ‘bardo of semi-darkness’.

It is difficult at this time to realize that you have died, so certain indications that you are in the bardo have been taught. For instance, you do not see the sun or moon when looking into the sky, and you leave no footprints and cast no shadow.

All manner of experiences, both positive and negative, arise at this stage, as a result of both good and bad karma. In particular, there are the four so-called ‘fear-inducing sounds’, which are:

the sound of a mountain collapsing, which comes from earth prana,

the sound of waves crashing in the ocean, which comes from water prana,

the sound of fire ravaging a forest, which comes from fire prana, and

the sound of a thousand simultaneous claps of thunder, which comes from wind prana.[7]

The so-called ‘three terrifying abysses’ are the three white, red and black abysses which are the spontaneous forms of the three poisons. When seeing them and falling into them, you enter the womb.

This is also the stage at which you undertake a search for a birthplace, feel craving for a home and a body, and so on. Various visions, which are indications of the entrance to a birthplace can occur, with appearances such as wheels of light, caves, empty hollows, male and female animals, male and female human beings and so on.

At these times, the crucial points of practice are as follows:

At first, when you are certain that you are going to die, you must cut all ties and attachment to this life. Confess from the depths of your heart any downfalls and breakages of samaya, harmful actions and so on. Devote not even so much as a single moment to feeling guilty about your own negative actions, fearing death, or being attached to this life. Instead, feel happiness and joy, and say to yourself: “Now I shall recognize the clear light at death. Or, if that is not possible, since I shall certainly use the bardo as an opportunity to travel to a pure realm such as Akanishtha, Zangdokpalri or Sukhavati, I shall be joyful.” Maintain, without ever letting it slip away, the strong intention and thought “I shall travel to the pure realms!”

Gently, in a relaxed way, as you settle into an experience of whichever practice is the clearest and most vivid for you, let go of the constituents of this life. Since you will be unable to practise any unfamiliar pith instructions, rely only on those practices which are clearest for you at the moment. These two points—settling into a practice in this way, and aspiring to travel to a pure land such as Zangdokpalri—are unsurpassable. In particular, it is absolutely crucial that you repeatedly form the intention to travel to the pure land of your choosing. It is exceptionally important to understand that even now, both day and night, you must never let go of this thought.

Thank you for posting this.

@_Barry
These are such impressive and beautiful texts, it is surprising that anything so clear and straightforward could be known, witnessed, and then be set into words while still in human form. I am so glad that I had insomnia tonight so that I found this. I have been sleeping

much too well of late. I read TTBOTD years ago, this is an excerpt or summary?

It is difficult at this time to realize that you have died, so certain indications that you are in the bardo have been taught. For instance, you do not see the sun or moon when looking into the sky, and you leave no footprints and cast no shadow.

I read TTBOTD years ago, this is an excerpt or summary?

His summary of the process.