I woke up at 3:00 AM this morning intending to journal two dreams but they faded even as I turned on the studio light and picked up my pen. Other thoughts flooded in instead…thoughts about the body, the dream…and pure consciousness.

Deepak Chopra, Donald Hoffman, Peter Russell and Rupert Spira all keep telling us that the universe, along with all of its inherent laws, might be just a construct of primordial consciousness.

The body gives us access to the dream with illusory images that are inherently light. Light, while having no mass, is still a finite thing that exists within the constraints of time and space. But…perhaps the dream gives us access to a much deeper realm of pure consciousness which is outside the constraints of the laws of physics; that infinite and primordial consciousness that we keep hearing about.

If that is true then perhaps we really are essentially localizations of pure consciousness and, at our essence, we exist outside of the constraints of time and space.

The problem with that last transition is that while it may feel right, we have not developed the capacity to really comprehend and understand it.

The body gives us access to the dream with illusory images that are inherently light. Light, while having no mass, is still a finite thing that exists within the constraints of time and space.

One of Andrew Holececk’s “riffs” is about light and that the light we experience in time and space is not like the infinite clear light of awareness, but that it’s not different either. He discusses this extensively in his book “Dreams of Light.” I believe he makes his case.

But…perhaps the dream gives us access to a much deeper realm of pure consciousness which is outside the constraints of the laws of physics; that infinite and primordial consciousness that we keep hearing about.

I’m sure you are right and have been demonstrating that very often over the past year in your posts and described activities. I remember the dream you had about the woman in a stage of Bardo that you later linked to a deceased person you couldn’t have known—how can that be anything other than outside a “scientific” explanation?

The problem with that last transition is that while it may feel right, we have not developed the capacity to really comprehend and understand it.

This is the path we are on, isn’t it?

I woke up at 3:00 AM this morning intending to journal two dreams but they faded even as I turned on the studio light and picked up my pen. Other thoughts flooded in instead…thoughts about the body, the dream…and pure consciousness.

Isn’t it great you get to do it again tonight my friend?

I remember the dream you had about the woman in a stage of Bardo that you later linked to a deceased person you couldn’t have known—how can that be anything other than outside a “scientific” explanation?

Thank you for recalling that, Barry…as that experience actually occurred in the liminal space between a dream and waking. It was truly beyond the dream and it was an absolute gift of knowledge about this deeper connection for which I am humbled.

So…this goes WAY beyond the dream…

I walk in the nearby nature center every morning in the dark and practice a little T’ai Chi before I head off to work. I walk again before bed, also in the dark. I always end up in a clearing by a small mound of gravel.

In my nocturnal meditations I often reach out to the energy of those woods to help fuel a dissolution of my physical being. I have described that powerful meditation a few times in previous posts.

After a particularly strong night last Friday I ventured out a bit later…the sun was up…and I found this array of stones on that gravel mound. When I went back in the afternoon, most were gone…the ones left were scattered about. I tried to lift the large round one and I could not. I took one of the small ones back with me. It is the small upright stone that is balancing in front of the stack of four. I have been trying to balance that stone on my desk to no avail.

This morning that large stone is also gone and there are only two small ones remaining. 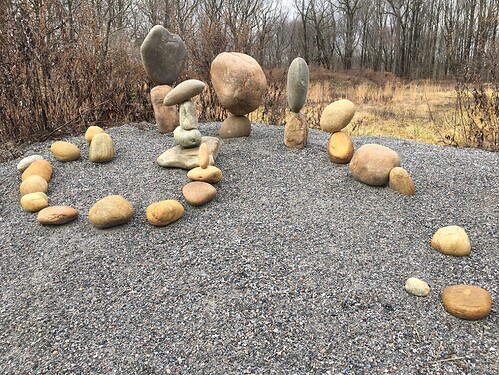 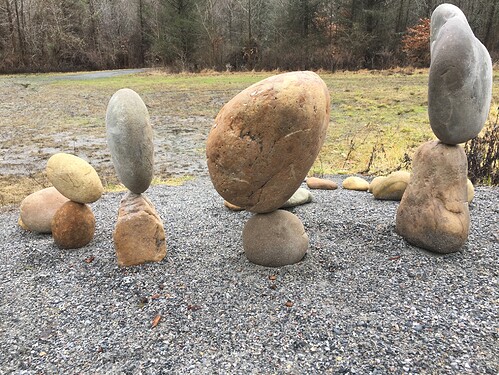 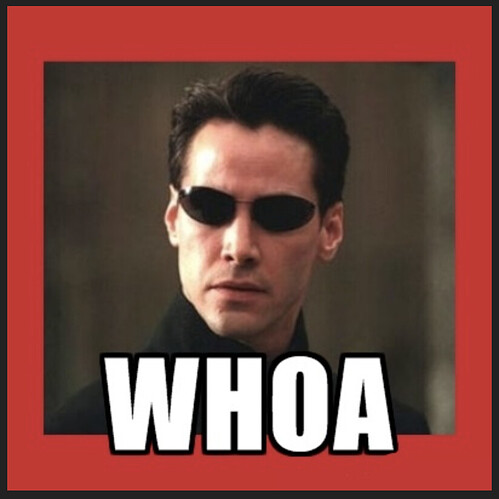 These stacked rocks are a little different. There is simply no physical way that they should have been able to be configured that way.

Here is a close-up of the biggest one. That is a 100# stone balancing there. When I first saw them I went up and placed a tiny stone on top of it…it took four tries for me to get it to balance and in the process I touched the stone lightly…it did not move. 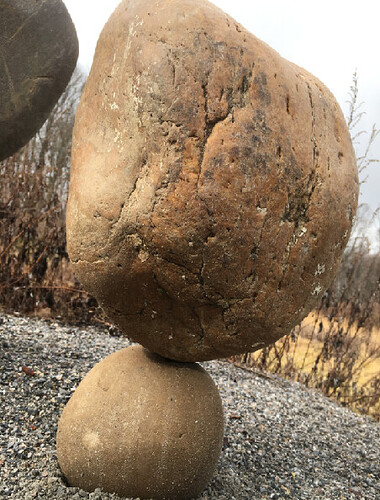 And then there’s this one…it is not even balancing on the apex of the stone below. 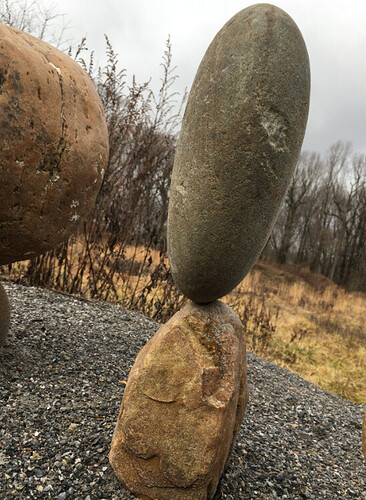 aren’t the people in the area intrigued?

I don’t think anyone else even saw it. After taking those shots I was walking back and a man passed me on the entrance path…he was going toward the field with the mound. I turned and watched him…he walked past the mound with the stones without even looking at them.

When I went back a couple of hours later most of the stones were gone…just the big one and six or seven other smaller ones scattered about.

I had been by the mound the night before…no stones.

the best stop dreaming, the medium know they are dreaming, and the average will definitely be able to transform their dreams.

Definitely pondering all of that…it is resonating.

Are the few stones still there? And how about the one you took back with you?
Umm…I know… maybe am putting out a lot of questions but this is so amazing!

All of the stones are gone now. I took a second one back with me. It fits perfectly in my hand and I have been meditating with it. There is a feeling of…connection…when I do.

The gravel mound was dumped there years ago by the Township…it must have been leftover from a project. The design of the layout definitely seemed symbolic but I can’t say what it meant.

I am a pretty conservative guy when it comes to this stuff, but there is quite honestly no way that those stones could have been balanced there like that within the confines of this physical world…no way. Look closely at the pictures. Many of the stones are all subtly off to the side of the stone upon which they are balanced. It is simply against our known physical laws.

The small upright stone that I took home is balancing upright in the picture on a tilted stone. I have tried many times to balance it on a flat surface…it is not possible to do so.

Here’s my take…I spend countless hours out there. I walk in the dark every morning and do T’ai Chi right there at that mound. I walk again in the dark at night and stand there for some brief meditation…sometimes it is very cold. On weekends I take very long walks in the surrounding woods, meandering around off the beaten paths. I think that I have stirred up some sort of…energy…something beyond the dream. I really feel this.

Did I mention that I am pretty conservative about all this stuff?

I have offered this little vignette to underline the very real possibility that there is much more going on in this world than we are ordinarily capable of seeing…and that we may be able to open up ways to witness such through the consciousness expanding nature of our dream practice.

I have been on these paths in my dreams, btw.

@cloudragon 's post resonates with me on its own…as another aspect of “Beyond The Dream”.

Reminds me, in an oblique way, of a story one of my Waldorf School science teachers related years ago. I paraphrase. He bought some property where there had been no visible wildlife for years, so he gave names to various geographical locations such as, for example, “Merlin’s Rock,” “Eternal Pond” and “Sherwood Forest” for a clump of trees. Almost immediately, birds and animals returned. He surmised that by “animating” those places, it invited life to return. No in the same league as your experience, but it does point to a connection.

it does point to a connection.

I absolutely believe that we inhabit our surroundings at a very deep level with our energy…and that the deeper we go within ourselves, the more we are able to cross over…or dissolve…perceived boundaries.

Thanks for the inspiration Steve!

Here at 4:30 AM I have just come from a deep meditation and before I go back to bed for a bit (no work today

) I need to write down a thought:

In the dream we practice with illusions, working with them and eventually dissolving them into light. Beyond the dream is the primordial state. With all illusions dissolved, we rest blissfully in the soothing blackness of clear light.

During the meditation before I posted I worked on opening my heart chakra. I had already worked through my throat chakra while first going to sleep and then my crown chakra at the first waking a few hours later.

So, while sitting in the dark, I let the blackness of clear light surround my heart and felt it loosening the side channel knots that surrounded the central channel at the chakra there. As I usually do, I reached out to the woods for energy and felt it coursing through me.

After posting, I went back to bed and went through some SSILD cycles before drifting off to sleep and dream. In the morning I woke refreshed and smiling with pre-sunrise light in the bedroom window. I decided to go out into the woods and meet the sun. It was cold…28 degrees…so I dressed warmly and at the last second I grabbed my phone.

When I got pretty far in…past where I had seen those other standing stones…I came across this. There were two others as well at different locations: 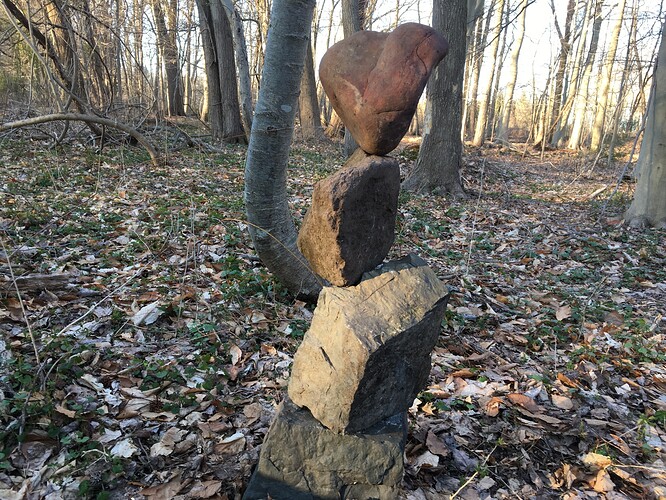 If you don’t mind I am going to make this into a print and hang it up. I hope more people will read and contribute to the thread which I think is as profound as any at the NightClub.