Relaxing the body in meditation

Possibly a stretch but related, promise!

A daily meditation practice is said to help stabilize any nocturnal practices, as I understand it.

Catch 22. For me, it’s holding patterns - both energetic and crappy posture over the years.

I have a plan in place to work the body. (plans are great, aren’t they!

Here’s the stretch part… I heard there was a way to ‘tie’ the body so that it can relax completely so that energetic ‘stuff’ has a chance to move. I asked a practitioner (who does Feldenkrais, but also buddhist), and he said I don’t want that, it’s only for Dark Retreats.

Milirepa had a meditation belt - it’s in all his pictures. Pretty sure he used it and look where he got (or didn’t get).

Is how to use a meditation belt so the body can completely relax super-secret, or can it be shared? I can’t find ANYTHING on it.

I see it as a way of etching my way into meditation posture from 2 directions, which would ultimately support dream practice.

I’ve been digging more and all I could come up with is on a 3-year retreat, you get a meditation box. I’ve heard Andrew mention it - but I didn’t realize that was his BED!!!

The question is HOW to use it.

I think that requires transmission or empowerment or something. Think Milerepa! (warning, there are a lot of crap knock-off thangkas out there! He should have the bent pose and hand at ear, this is the best I could find w/o spending too much time) It’s part of some practice I think. Influence the winds is my only guess.

http:// sutrajournal.com /images/2016/jan/yogini-belt-600.jpg
enter the above into address bar, w/o spaces for photo that may or may not load above.

I also saw a few images of a modern eastern yogini in a couple poses with a belt in this book:

which I ‘flipped through’ and ended up with a migraine after ‘snapping out of it’ an hour later. Amazing book on View, not an instruction manual. I want to curl up with it soon!

During the recent Tummo retreat one of the Tibetan Yoga teachers recommending using the belt to help some folks to sit in a full lotus position and stay there.

Barry have you used this?!

No, just read about it. If I ever do a 10-day Vipassana retreat again I would bring one along.

I think that requires transmission or empowerment or something.

In the Yungdrung Bön buddhist lineage, the belt is used as an utensil to help you to realize if your sitting posture - i.e. staight back - slips during a long session. As it has been taught to me, you are not supposed to lean into it as a back support. It is like a gentle tug if you lean too much forward or backward.
Empowerment or transmission is traditionally required for whichever practice you are practicing, not for using the belt.

It’s been a few years but the last time I did it we spent several hours in small meditation cells. People could bring those “meditation seats” but I just used an abundance of pillows. I’m getting older. I don’t know if I could do it again without some additional support. Just thinking out loud.

I’m in Massachusetts. Haven’t been to the center in a while, but I do have some medical conditions and last time was able to have two meals with medications. Cells were used during specific periods but again, no idea as to how its evolved. Started in 1981 in Nepal and it was different there as well.

@mycoses I just learned of a different way of sitting with a belt in which you can actually support your lower back with it. 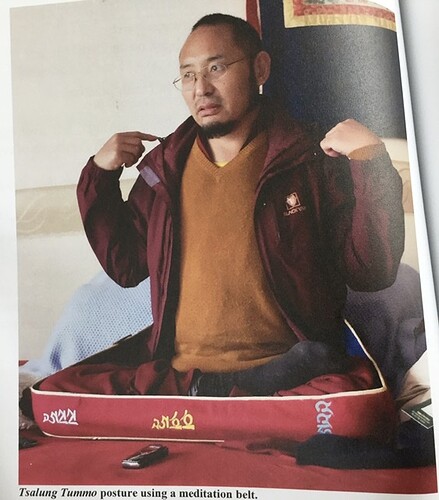 image563×640 96.8 KB
A (half-) lotus seat is traditionally recommended but some teachers such as B.Alan Wallace emphasize that it is more import to be unmovingly seated with a straight back while being relaxed to the maximum.
For most not so young anymore westeners the lotos-seat can be too heavy for the joints/ligaments, so I personally decided to go with the half-lotos most of the times and open that position up when thimgs get too tight.
3 Likes
_Barry December 22, 2020, 3:16am #18

Received the White Tara empowerment from him a couple of summers ago and when he finished it began to hail outside. It was over seventy degrees. In Boston.

Lama Lena has taught on the use of them before in one of her Q and A sessions: https://m.youtube.com/channel/UCrEhnfz8y-I61ZhWKcrh--g. I remember it was earlier this year but can’t quite remember the specific video. I’ll post here if I find it! I also second everything that has been said here - ultimately, you need to get your back as straight as possible for your body, and using props to do that is perfectly acceptable in the Tibetan tradition. There was a phenomenal yogi who learned Dzogchen in his 80s. His teacher built a shelf for him to put his chin on because he couldn’t hold his back straight. It is said that he achieved the rainbow body.